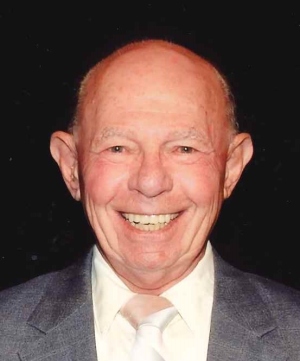 Cincinnati, Ohio – Charles “Chuck” N. Ellman of Cincinnati passed away on January 22, 2020 at the age of 90 years. Chuck was the loving husband of the late Betty Ann (nee Wise) for 48 years. He was a dear friend to the late Joan Reckseit and her family, David (Sandy) Reckseit, Lucy Reckseit, and Margo Berke; and dear friend to Margaret Lang and her family, Matthew Lang (Bonnie), Sarah (Charles) Sanford and Ann Lang. He was preceded in death by his brother George Ellman, PhD. (Phyllis), and sister, Clare Rolandt Verduin. He is survived by many cousins, nieces and nephews. Chuck was born in Chicago and attended Sullivan High School where he lettered the rifle team. He was a member of the school’s ROTC drill team which won the city championship. Chuck moved to Cincinnati where he met and married Betty Ann. After serving in the U.S. Army during the Korean conflict, they returned to Cincinnati, where he earned a degree in Business Administration from the University of Cincinnati Evening College and joined Delta Mu Delta Scholastic Society. Chuck was also active in many other organizations throughout his lifetime; Vice President of the Williams YMCA Camera Club, Co-President with Betty Ann of the Promenaders Dance Club, Treasurer for the Scott County Council of the Arts in Kentucky, Treasurer of The United States Driving for the Disabled organization, member of the President’s Council of the Wilderness Society and President for several years of the Cincinnati Astronomical Society. More recently, Chuck volunteered at Christ Church Cathedral’s 5000 Club where he served food to the hungry since 2012. He also volunteered at the Cincinnati Public Radio Station. Chuck was a member of Christ Church Cathedral where he ushered for many years. He also co-authored an article on Creating Star Parties, which was published in the Sky and Telescope Magazine. His nearly thirty-year career at Proctor and Gamble began as a temporary clerk, eventually getting him promoted to a management position. His auditing efforts netted 2.5 million dollars back to his employer. However, Chuck received pleasure from helping people get good raises and promotions. He was proud to be asked to mentor minorities at work. A memorial service and reception in celebration of Chuck’s life will be held at Maple Knoll Village Chapel on March 13, 2020 at 1 PM.