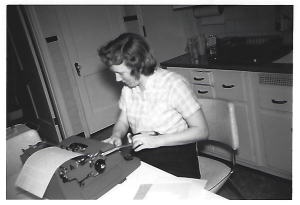 SANSALONE, Jane Claire (nee Beck). Passed away on Friday, September 10, 2021. Jane attended Our Lady of The Angels High School in St. Bernard (1946) and Our Lady of Cincinnati College (later Edgecliff) on academic scholarship. She majored in History and minored in English, French, and Philosophy. Jane was a very active member of the student body; she served as President of the OLC Debate Club and was a member of Kappa Gamma Pi, the French Club, the International Relations Club, the Edgecliff Players, and was editor of the college newspaper The Edgecliff. She talked often of the intellectual rigor, unconditional love, and lively fun she had during her college years. She graduated cum laude in 1950.

Jane grew up in Clifton and appreciated all things Cincinnati – most of all its strong German heritage, Over-The-Rhine, and Findlay Market, where her family had a produce stand. She was a Cincinnati Reds fan, breaking her strict “no tv rules” to allow her children to stay up late to watch the ‘75 and ‘76 World Series. She also loved the high dive at Coney Island and roller skating down Clifton Avenue to her Dad’s store.

Before marriage and raising her children, Jane taught 5th grade and high school history. She also held several secretarial posts for the U.S. government. She loved international travel, including recently to Guatemala, where she sponsored several children and corresponded with them for many years. Her middle years were devoted to raising eight spirited children: John, Mary, Anthony, Vincent, Regina, Rosemarie, Angela, and Monica, guiding them intellectually, spiritually, and culturally. The highlight of the Christmas season for her children was always Jane’s St. Nick party.

When the children were grown, Jane enrolled in college courses at both University of Cincinnati and Xavier University where she enjoyed the company of the young students. She also worked as a freelance writer, authoring a biography of her beloved Uncle Gerald, a WWII Chaplain, entitled White Flak: Vignettes of a Franciscan Friar. She frequently wrote about family life for The Catholic Telegraph and edited papers for UC and XU students.

Later in life, Jane was sustained by daily mass, at St. Clements in St. Bernard and Bellarmine on XU’s campus, where she often had lunch with the students. Not wanting to show absolute favoritism to either the Franciscans or the Jesuits, she also attended St. Gertrude to keep an eye on the Dominican Friars. Jane was also a yearly retreatant at the Abbey of Gethsemani. During these years, she also enjoyed the company of her numerous grandchildren.

Jane was a free thinker and committed to social justice. Her profound devotion to her Catholic faith, insatiable curiosity about the world, and of course her keen wit sustained her through many challenging moments. And during her toughest days, an Aglamesis ice cream soda was all she needed to return that twinkle to her crystal blue eyes.